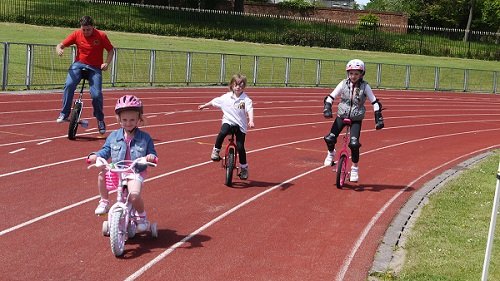 The Sun came out in Blackpool for their annual Big Bike bash. This is held at the athletics track. The Circus school was very busy with children and adults alike enjoying all the items that were available. The people also enjoyed seeing our students that came along to help, including Max, Morgan and Leah. In the picture can be seen Max, Morgan plus a young lady on her Unicycle that taught herself to ride and will hopefully join the Circus school. Her sister is leading the way! 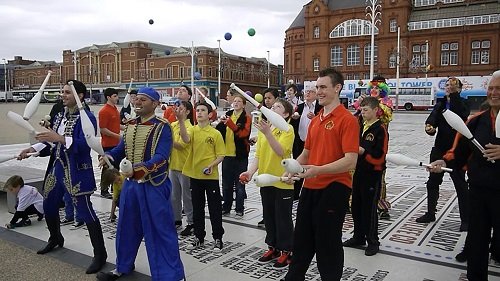 Blackpool Tower invited Clowns and jugglers to join Mookie and Mr Boo in an attempt on a world record. The response from the north west’s circus schools was very poor apart from Blackpool Circus school who provided the bulk of the participants. On a very windy day Clowns and jugglers were filmed by Granada reports and North West today on Friday the 14th June. Local school children joined in to make it a memorable occasion. It was marred by one of the “Clowns” stating on interview that the only clown for him was Charlie Chaplin, he never heard of the other Charlie, Charlie Cairoli ! 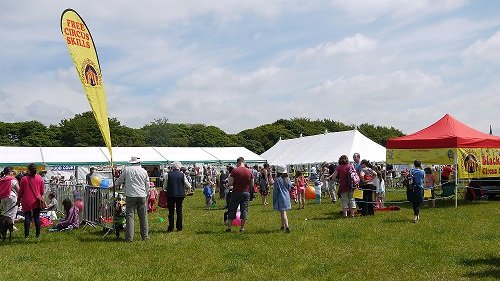 Following on last years disastrous show due to a waterlogged site, this year proved to be exceptionally bright with a record turn out. Yuri & Tonya led the Circus workshop and found the people to be old fashioned in the respect that they were very strongly family led. A record number of them could already juggle 3 balls and we were able to show them the next moves which proved very interesting! Many of the children also had some Circus skills including Unicycling which is not easy on farm field. A great day was had by all and thanks to organizer Brian who made us very welcome on the day.

The Blackpool Tower Circus is gearing up to celebrate on one of the most important days in the Circus calendar, World Juggling Day.

The 119 year old Victorian Circus, which resides amidst the legs of the Blackpool Tower, is planning to break a Guinness World Record for the number of clowns juggling simultaneously. There’s just one problem, the Tower needs a few more clowns…

The Blackpool Tower Circus is urging clowns from across the country to come forward on Friday 14th June at 10am to join the Tower’s resident clowns, Mooky and Mr. Booo, in the world record breaking attempt on the Comedy Carpet in front of the famous seaside attraction. The only stipulation is, the volunteers must know a thing or two about juggling.

A quite winter and spring but summer has started with a bang! The Circus school was booked to present background entertainers for the Council awards in the Winter Gardens. We were asked to provide an act for Tony Jo’s Charity show at the Opera House. The cast was led by an old friend, Roy Walker plus some very interesting acts. Our act featured Thomas Senior now known as “Thomas Bounce” since his appearance on Britain’s got talent. That’s him below in his red waistcoat before he became famous along with Daniel on stilts, Martyn and Joe, Emma-Jane and Max. 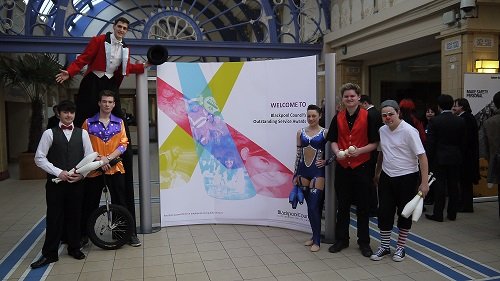 We then had a visit from “5 ring Circus” a youth Circus group from Newcastle-upon-Tyne. We invited them to our home to see our memorabilia as they are researching Circus history with a grant from the Heritage lotary fund. On the next day, with members of BCS we went to the Tower for a Heritage tour followed by a visit to the Tower Circus show. Meanwhile, Thomas Bounce had succeeded in his audition for Britain’s got talent and appeared in the fourth Semi final, where surrounded by a bevy of girl dancers he failed to reach the Final of the show. 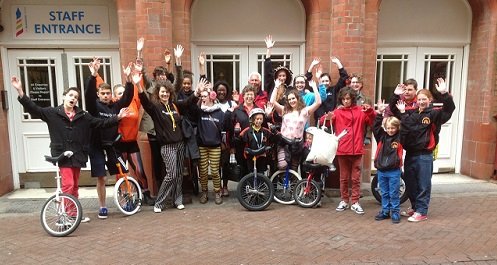 On the same day, 10 students from the Circus school travelled to Media City in Manchester to record an episode of “Blue Peter” The program featured a Russian Juggler from the travelling “Moscow State Circus” He juggled with 5 footballs while standing on a globe decorated as a giant football. Our students were on stage with him and Tommy Schools showed his skill with 7 balls. For the live show in the evening, Max, Meredith and Will did a quick show juggling and unicycling and then making some juggling balls with the presenter, Barny. 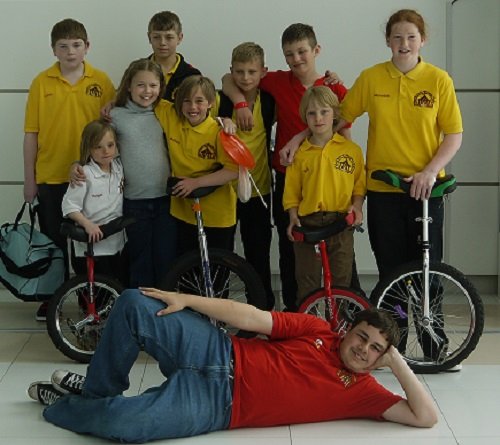 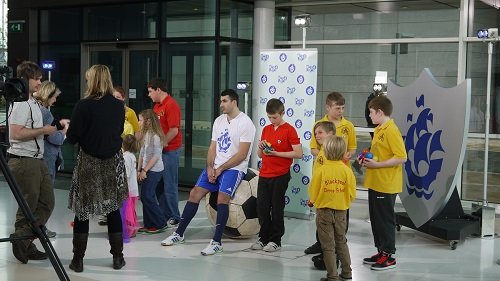 On the 4th June 18 Students and mums are going to see the Moscow State Circus in Lancaster thanks to an invite from Paul Archer, the Circus manager who accompanied the Russian juggler to Media City. A forthcoming event takes place on the Comedy carpet in front of the Tower. It is an attempt on a juggling world record to coincide with World Juggling day 15th June. We join with the artistes from the Tower Circus on the 14th June.  Our Stilt walkers are now sub contracted for the Summer to the Tower. Their job is to encourage the visitors to come into the Circus. At present they are Daniel Tate-Potts, John Swift and Sophie Jakeman. Photos and video to follow.

Highfield Humanities college has been rebuilt and completed during the summer break. It is now a fantastic state of the art building with a huge sports hall.

We are planning to introduce Ariel silks and hoop in addition to all our other activities that include the Tightwire, Unicycles, Walking globe, Free standing ladder, Rola Bola, Acrobatics and all the usual suspects like Diabolo, Plate spinning, Juggling etc.

For details see the page for “Circus club” 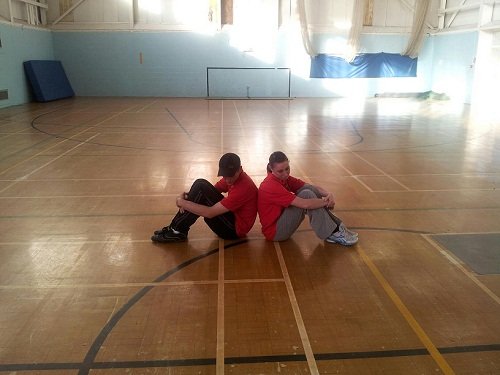 The photo says it all. The last night at the old sports hall at Highfield
Humanities college. Although only running one night a week there have been many notable success stories from the training received here. Joel Hatton, Unicycle juggling act and Ringmaster in a second season with a touring Circus. Holly Johnstone, Completed a 3 year degree course with Circus space in London and is now rehearsing for Batman Live in the USA. Jennifer Potter has toured with the Circus of Horrors and is now working in the USA. Gemma Stanyer has married into a Circus family and is now touring the UK. Mathew Craddock toured with Take that. Emma-Jane Coldham entertains the crowds at the Tower Circus. Jamie-Lee Coldham works Fetes and Galas with The Vander wheel of death. Thomas Senior has developed a professional bounce juggling act and has appeared at the North Pier and Grand Theatres Blackpool. Max Salthouse does shows and workshops. Martyn Hawkins has also appeared many times on stage for the Circus School. Daniel Tate-Potts and Joe Walker do Children’s parties at Blackpool Zoo. James Wade has also worked at the Zoo and along with John Swift has worked at Haven Leisure. And our Unicyclists have ridden in many chartity fun raising events. 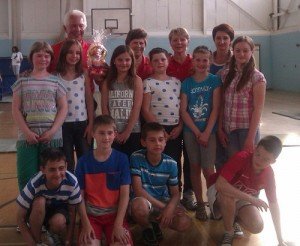 Every year Blackpool Circus School plays host to the children of Byelorussia & the Ukraine, The local population are still suffering effects from the meltdown of the Chernobyl nuclear power station in 1986. These visits to the UK help to enhance the quality of these children’s lives. The families that look after these children should be supported in anyway possible and the Circus School is always pleased to welcome them! This year we had our own Russian, Tamara who was able to converse with them in their own language and help to put them at ease.