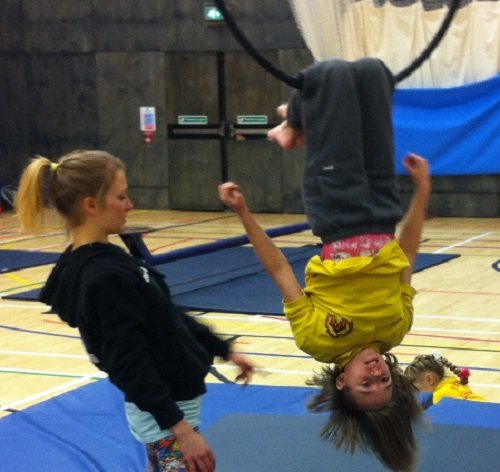 Becky Pearson is practising and teaching Silks and Hoops at Wednesdays Circus club. A few of our students are taking advantage of her skills. Inspired by Holly Johnston (see post below) The photo shows Bobbie who is one of our keenest young students, her main skill is the Unicycle (watch out for her and her younger sister Morgan riding on the prom at Blackpool)
Our other ex students are also doing very well, most recent is Max Salthouse who started with us when we visited his Primary school in Fleetwood for a term of workshops. He toured last year with Charles Chipperfields Circus and is planning the same for 2015. Joel Hatton has toured with Zippos Circus and featured in the Illumination show at the Winter Gardens Blackppol last year, he was joined with another of our students Ashliegh Littlefair. Joel is in the 2015 Tower Circus show. John Swift on stilts at Blackpool tower. Thomas Bounce juggler working as a Children’s entertainer with CJ Tazz, he also did very well on BGT. Obi Ashworth works around the country working in Fetes and Galas. Jennifer Enderez was in the Circus of Horrors. James Wade, Daniel Tate-Potts and Joe Walker worked workshops with Children at Blackpool Zoo. JL Coldham, Daniel Tate-Potts, Emma jane Coldham and Billy Robinson have featured on the Vander wheel of death visiting The Arab Emirates last year and many Fetes and Galas throughout the year. Not bad for just a one night a week Circus club!

Holly Johnstone was one of ours!Joel & Bobbie Link Circus school with the Tower Circus
Scroll to top